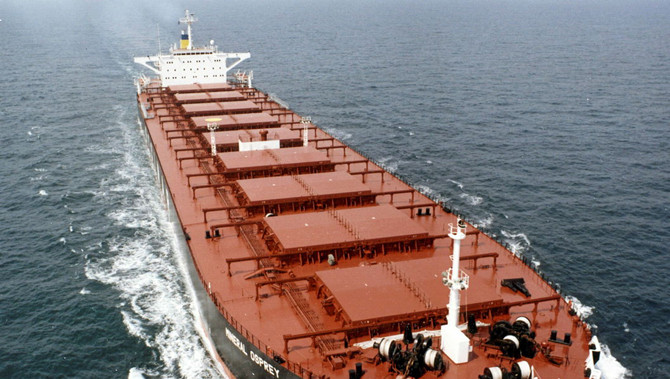 Capesize time charter and voyage freight rates hit a record increase on Sept. 13 as tonnage supply disruptions caused by Typhoon Chanthu escalated, exacerbated by the COVID-19 related protocols already adhered to at various ports.
The S&P Global Cape T4 index, a weighted average index of the most liquid Capesize routes, reached $49,460/d on Sept.13 for ships burning 0.5%S marine fuel. This is an $8,764/d, or a 21.5%, jump from $40,696/d on Sept. 10 and is the highest single-session jump since the assessment was launched in November 2019.
Supply disruptions, mainly due to ships waiting either to discharge, or depart from Chinese ports, were starting to get priced in from the second half of the week ended Sept. 11. The Cape T4 has increased 42.5% over the past three trading sessions from when Platts had assessed the route at $34,704/d on Sept. 8.
The freight rate for shipping iron ore from Port Hedland to Qingdao reached a 12-year high on Sept. 13 at $16.85/wmt, up $2.65/wmt from Sept. 10, Platts data showed. Freight was last assessed higher on Dec. 7, 2009.
Enthused by the strong rates in the Pacific basin, freight out of the Atlantic have shot up too, due potentially to limited supply.
The freight rate for a Capesize to move 170,000 mt (plus/minus 10%) iron ore cargo from Tubarao to Qingdao was assessed at $35/wmt Sept. 13, a $3/wmt rise from Sept. 10, the highest session-on-session increase since May 13, 2010.
Charterers were required to pay up to attract ships to ballast from the Pacific to the Atlantic, though market participants said the gap between offers and bids on the key Brazil to China route were quite wide as well. Shipowners’ stiff resistance was pointing towards further upside.
Although market consensus was that the current rally was mainly supply driven, a ship-operating source said: “Typhoon is the main trigger [for this rate increase].”
After affecting the southern Chinese coast, Taiwan and the Philippines, Typhoon Chanthu is approaching Shanghai and Chang Jiang Kou river channel, which has been closed since late Sept.12, according to Chinese ship agency sources.
According to Platts cFlow trade-flow analytics software, currently 69 Capesize vessels are positioned around Shanghai and a further 42 vessels are expected to arrive for the remainder of September.
“[Pacific] market is very hot for prompt dates. Typhoon is causing massive chaos for end-September laycans out of Western Australia,” a Singapore-based shipbroker said.
“What you saw from Typhoon In-Fa will repeat again,” a second shipbroker said, adding that the congestion at Chinese ports due to COVID-19 related protocols will not be easy to clear.
Meanwhile, the firmness in the Capesize market could force charterers to split their cargoes and ship them on smaller Panamax ships. According to a chartering source with a commodity trader, the splitting of Capesize cargoes was starting to look viable. However, a few Panamax shipbrokers pointed out that they have yet to see demand for smaller tonnage arising from such split cargoes.
“You also need consider that Q4 demand is always strong in terms of export volumes as well,” a shipbroker source said.
While the market is on a bull run, many sources are cautious of taking a forward view of the market.
“I think miners are pushing out cargoes amid expectations that seaborne iron ore price maybe drop further,” another China-based shipbroker said, adding that steel production cuts would continue, while maintenance at mills was also expected towards the end of the year.