2021-07-22 09:07By： Platts
China's dependence on Middle Eastern crudes is set to grow even further in the second half of the year, extending the first-half increase in market share in Asia's biggest oil consumer, with rising throughput among state refiners more than offsetting any decline in crude runs in the independent sector, analysts said July 21.
The growth in market share for the Middle East in China in H1 comes despite the country's crude oil imports in the period also declining for the first time in eight years.
Analysts said that, with China's overall oil imports set to recover in H2 — amid expectations that the commissioning of new refining capacity will create incremental demand — Middle Eastern producers will have the opportunity to expand their footprint in the country even further.
“State-run refineries will likely increase runs with relatively fewer maintenance schedules. This would compensate the product supply reduction from independent refining sector and from the blending pool in H2,” said Wang Zhuwei, lead analyst for the Middle East Oil Market at S&P Global Platts Analytics.
“The state-run companies take more than 80% of Middle East crudes that flow into China. Their higher throughput will lead to bigger appetite for Middle Eastern crudes,” he added.
The new refining capacity in both the state-run and private sectors is designed to process Middle Eastern crude, a Singapore-based analyst said.
In H1, Middle Eastern suppliers delivered 125.95 million mt, or 5.1 million b/d, of crude to China, data released by General Administration of Customs on July 20 showed. 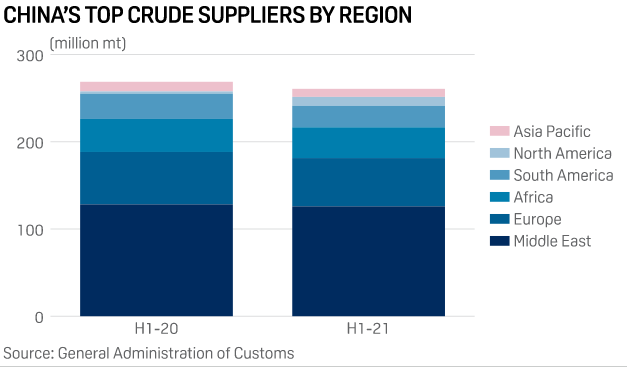 Middle East share rises to 48.3% in H1
Despite a 1.8% year-on-year decline in volume, Middle Eastern suppliers took a 48.3% share of China's crude import market in H1, up from 47.7% a year ago, according to GAC data.
Beijing has imposed hefty consumption taxes on imported blended stocks of light cycle oil, mixed aromatics, and small-scale independent refineries’ feedstock bitumen blend since June 12, resulting in a reduction in oil product supplies from the blending pools and independent refining sector.
Moreover, the country's small-scale independent refineries will likely cut their crude imports by up to 26% in H2 from H1 due to a shortage of crude import quotas, according to a worst-case scenario estimate.
At the same time, Platts Analytics estimates China's crude imports will hit a fresh high in Q4 and the country's overall imports in 2021 will likely rise by 1% year on year to 11 million b/d.
China's crude imports in H1 fell 3% to 10.56 million b/d, GAC data showed, due to destocking activities and a high base in the same period of 2020.
Platts Analytics said that there is likely to be healthy growth in crude imports in H2, with term buyers of Middle East crude — state-run plants and private refining petrochemical complexes — likely to contribute the most to the increase.
Interestingly, China's dependence on Middle Eastern crude rose in June despite the total crude inflow volume slumping 24.5% to 9.81 million b/d from the record high of 12.99 million b/d a year before, GAC data showed.
In comparison, South America's market share fell to 9% in June from 12% in the same month of last year due to a 53% drop in supply from Brazil, which is a favor supply region for small-scale independent refineries.
Fewer suppliers
Moreover, with the heavy year-on-year drop in imports, the number of global crude suppliers to China in June narrowed to 26, down from 41 in the same month of last year.
“All these mean Middle Eastern crudes are a kind of ‘must-have’ barrels for China's refineries, as most of them are designed to crack crudes from the Gulf and the big refineries are bundled with term contracts,” a Beijing-based analyst said.
Iran is set to deliver about 1.7 million mt of crude to China in June, according to Platts data, despite the country being absent from GAC's supplier list.
The Iranian barrels are likely to be bitumen blend and crude oil being delivered into China via other countries, including Malaysia, Oman or UAE, Platts has previously reported.
As a result, shipments from Oman and Malaysia both saw a year-on-year increase in June, rising 29% and 105%, respectively. The US was the only other supplier to China to see a year-on-year increase in June, jumping 143% due to a low base in the same month of last year.
As usual, Saudi Arabia and Russia retained the top seats for both June and H1. Saudi Arabia sent 1.77 million b/d of crude to China in H1 to keep its 16.8% market share, while Russia's deliveries came to 1.61 million b/d, with its market share declining to 15.3% from 16.4% a year before. 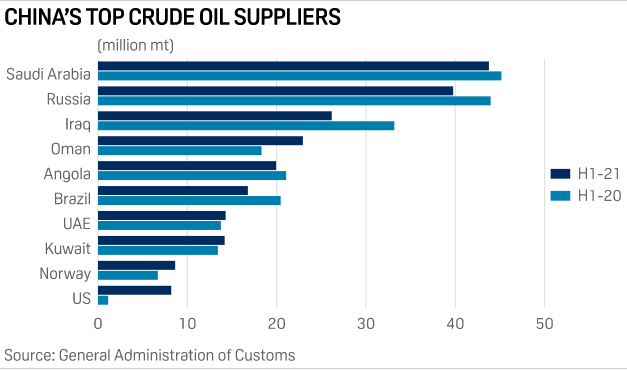