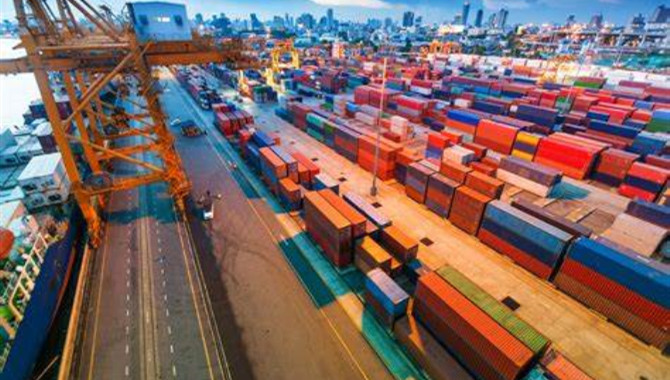 For the first time in decades, there's a shortage of shipping containers in China as export shipments outpace inbound ones, and freight rates are surging as the imbalance worsens, industry analysts said.
Export demand is rising as production disruptions caused by the pandemic in many parts of the world continue, while China has managed to resume production after containing the pandemic.
The container throughput of eight hub ports in China rose 11.1 percent in October, and throughput involving foreign trade increased 11.9 percent year-on-year, 3.3 percentage points faster than in the previous month, according to the China Ports and Harbors Association (CPHA).
China's exports continued to soar in October, with a total of 1.62 trillion yuan ($245.87 billion), up 7.6 percent, while imports stood at 1.22 trillion yuan, up just 0.9 percent, according to customs data.
Lopsided trade means many containers are heading overseas and few are returning in a timely manner, which has contributed to the shortage of containers in China, experts said.
A source with the CPHA confirmed to the Global Times on Thursday that the shortage is real. Many containers head overseas full of exports but far fewer come back, because there's little or nothing for them to carry.
"Control of containers is in the hands of shipping lines, and the dock is only responsible for loading and unloading," said the source, who suggested contacting shipping companies for more information.
China COSCO Shipping Corp and Maersk had not responded to the Global Times as of press time.
A manager surnamed Mao with Zhonghuan Group, a large international freight service provider based in Dalian, Northeast China's Liaoning Province said that at present, for every five container ships going overseas, only one comes back.
A source at the Lianyungang Port in East China's Jiangsu Province told the Global Times on Thursday that because the COVID-19 crisis put global container trade into hibernation for much of the year, demand for containers began to shoot up as trade warmed up this fall.
In September, container trade began to grow again and has been gaining steam ever since.
In addition, traders in China are rushing to export goods that have been piling up since the COVID19 outbreak earlier this year. So sea freight rates are jumping as they jostle for container space, insiders said.
Domestic freight rates have doubled to 4,000 yuan ($607) per standard container since September, and for foreign routes the situation is similar or worse, said the source at Lianyungang Port.
Long-distance routes to the US and Europe are the worst affected. Hiring a small container headed to the US West Coast, for example, costs $3,350 and large ones cost $4,650, double the rates two months ago. The situation is the same for Europe, industry insiders said.
"At present, containers will not be available until December, and we do not know what the rates will be like then. Given the current situation, they will likely be higher," said Mao.
Containment of the pandemic in China has significantly boosted the nation's exports, making China as a major supplies provider to the world. As large economies like the US and EU are facing a resurgence of the pandemic, many factories are shut. So containers leave China full and come back empty - or not at all.
Meanwhile, air cargo transport has not resumed 70 percent of its pre-COVID level, increasing the pressure on sea transport, Wu Minghua, a Shanghai-based independent shipping industry analyst, told the Global Times on Thursday.
"The finished products that will be sold next month as Christmas goods need to be exported as soon as possible, but lack of containers may lead to delays," said Wu. Many of China's exporters may have to consider cutting profits to ensure deliveries on time or face default penalties for late deliveries.
In order to tackle the shortage issue, some shipping companies, including COSCO, have now responded by bringing back as more empty containers as possible from ports in the US and Europe.
"Many shipping companies have begun to order large-volume containers in China, the major container manufacturing power. But it takes time to make a container, so the shortage may not ease before the first quarter of next year," said Wu.
Source:Global Times