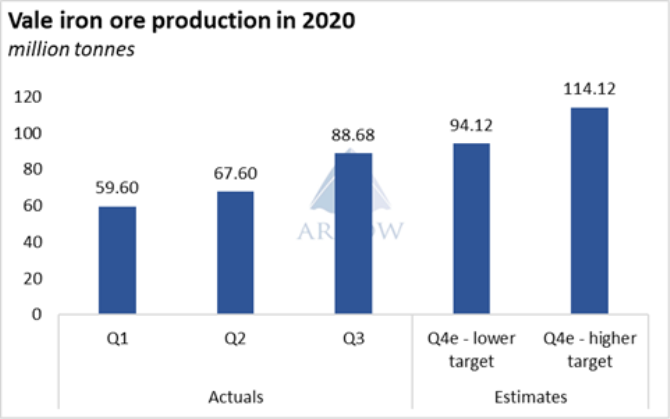 Vale released its Q3 production figures last night. Results show a strong increase in their iron ore output in Q3, both quarter-on-quarter and year-on year. The higher production reflects improved performance at its Northern System, the resumption of its Itabira and Timbopeba units in June and the restart of its Fazendão mine in July.
Key takeaways are;
·Q3 iron ore output was 88.7mt, up 21mt or 31.2% from Q2 and up 2mt and 2.3% from 3Q19
·Northern System output hit an all-time high, with production reaching 56.9mt
·Vale managed to stabilize its production rate at around 1 million tonnes per day in mid-July, which was maintained throughout Q3
·The logistics lead time between production and CFR sales started to normalize in September. The miner expects further improvements in Q4
The report did not provide an update on Vale’s full year production guidance. The target was kept unchanged at 310-330mt in July (Q2 production results) but the miner said that the lower guidance was the “more likely scenario”.
Vale’s lower-end target implies a total output of about 94 million tonnes in Q4. If Vale manages to maintain its current daily production rate of 1mtpd, they could hit that level.
However, in the past three years production dropped slightly in Q4 due to seasonal factors (2017-18) and operational disruptions (2019).  (In 2017-18 production in Q4 dropped by an average of  2.8mt from Q3. The decline was much larger in 4Q19 (8.4mt), but it was mainly related to the operational disruptions caused by the dam accident earlier in the year as they had to stop production at some facilities due to safety reasons.)
If the same seasonality plays out this year, production may fall short of 94 million tonnes that is required to hit the 310mt guidance.
That said, Vale expects to resume operations in Serra Leste mine in its Northern System in Q4, which would add 6mtpy of additional capacity and offset some or all of the potential losses in output due to seasonal factors.
Vale's shipments reflect its strong production past few months. Average weekly shipments in 2H so far are in line with the average required to hit the guidance.
As things stand today, there is a good chance that Vale will hit its lower guidance for the year. While seasonal factors may effect output in Q4, any potential loss due to seasonality is likely to be offset by the ramp up in production in the Northern System. Expected improvements in logistics lead time could also improve sales/cargo availability at ports.
All in all, we believe Vale’s shipments in Q4 will be in line with the target set by the miner earlier this year, or fall just slightly below it. Either way, shipments are expected to remain healthy, unless there is another unexpected disruption.