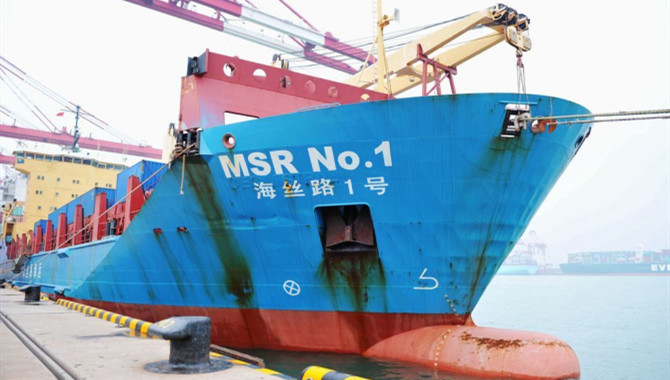 Without a seaport, Hunchun, a border city in Northeast China's Jilin province, is aiming to build itself into a marine economy hub.
"Though we do not have a seaport, we have a lot of advantages in terms of location and other fields," said Piao Yifeng, director of the city's shipping administration bureau.
Located at the junction of China, Russia and the Democratic People's Republic of Korea, the city is 71 km away from the Russian port Zarubino.
Wang Jindong, who has been engaged in seafood trade for nearly 20 years, has seized the business opportunities in the city. In 2016, two land ports in Hunchun were approved as designated ports for seafood import. The opening of a freight route linking the city with Russia's Kamchatka Peninsula and the Zarubino Port also helped cut the cost of seafood transportation.
"Before the opening of the route, Russian king crabs had to be transferred to China via the Republic of Korea and Japan, which was costly and affected their quality," said Wang. "Now the king crabs caught in the deep sea of Russia can be transported to Hunchun the next day."
Having first imported king crabs via the route in 2017, Wang can now import up to 50 tons of the seafood each day. He is expanding his trade business in Thailand and other Southeast Asian countries.
In September 2018, a freight route opened linking the city with the Ningbo-Zhoushan Port in east China, one of the world's top container ports, and the Zarubino Port. Another route was launched linking Hunchun, the port of Qingdao in east China, and the Zarubino Port in May this year. Now 29 voyages have been made along the routes via the city, with over 700 million yuan (about $100 million) worth of cargo.
"The opening of the routes not only solved the transportation problems of corn, timber and other goods in the province, but promoted trade and economic cooperation in Northeast Asia," said Piao.
At the end of April, the National Development and Reform Commission and the Ministry of Natural Resources issued a guideline on the construction of the marine economy demonstration zone in the city, requiring the zone to promote the development of marine industries.
Source:Chinadaily