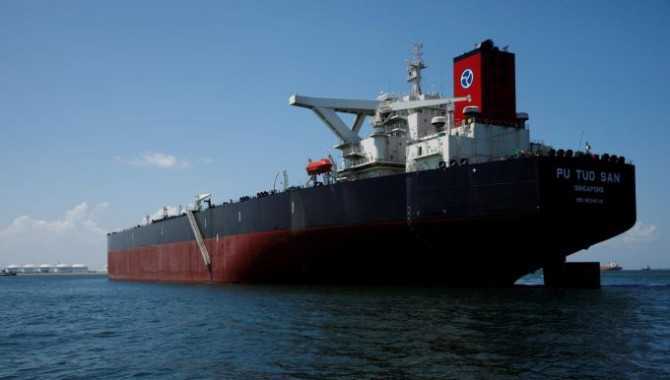 Singapore's oil trading giant Hin Leong Group, which is also one of the world's largest tanker owners, has become the latest to feel oil's whiplash amid an unprecedented drop in demand for the commodity.
Given its girth, the company's debt woes, spread across more than 20 banks to the tune of some US$3 billion, are fuelling concerns over potential ripple effects across the sector in the city state, which is the world's key oil market and top bunkering port.
The Business Times understands that Hin Leong, founded by low-key tycoon Lim Oon Kuin (or O. K. Lim, as he is widely known in the trade), may seek a debt moratorium from the court for six months.
A source close to the company said this is one option, "so that banks can't touch him while he gets things reorganised", in the hope that the dark clouds will lift during this time frame.
The group is also considering another option - that of raising around US$200 million to get some breathing room for the short run, said the source.
It is widely known that Hin Leong has appointed Rajah & Tann as advisers.
Last week, Bloomberg reported that at least two lenders had frozen new letters of credit - the all-important financial backstop for commodity traders - to Hin Leong Trading, the group's trading arm, amid talk of its mounting financial trouble.
The group had met with lenders on Tuesday to discuss potential asset sales and mark-to-market losses on commodity trades brought about by the volatile oil market, said another source.
Hin Leong Trading's financial accounts could not be found on the Accounting and Corporate Regulatory Authority (ACRA).
However, BT's search turned up a "general charge of receivables and contract rights" on the company lodged by Societe Generale with ACRA on Tuesday.
Queries to Hin Leong and Rajah & Tann went unanswered; contacted on the matter of the charge, SocGen declined comment.
It is not clear what exactly triggered Hin Leong's recent troubles, although some speculate that as a major trader, it could have been caught on the wrong side following the oil rout, particularly if it had taken substantial long positions.
March was a cruel month for the commodity on the back of the Covid-19 pandemic, which has dried up demand for oil; there has also been a price war between oil majors Saudi Arabia and Russia.
April is not shaping up to be any better - despite the recently-agreed output cuts by Opec and its partners that failed to inject any optimism. Brent crude is trading at US$28 per barrel, from nearly US$69 per barrel at the start of this year. (see amendment note)
An industry player commented: "If Hin Leong is in trouble, can you imagine what it's like for the other big boys?"
Simon Neo, a veteran in Singapore's bunkering industry and a former regional manager for Asia at the International Bunker Industry Association (IBIA), said: "Many companies will be caught in some sort of financial situation. Big players caught holding too much unsold stock will be in trouble. It's a numbers game right now."
One industry source suggested that Hin Leong's financial strain may not be limited to the trading business: "Each company is privately held, but they are all inter-related and owned by the same person. So, if the banks are pulling the credit lines on trading, which is at the forefront of the physical oil, the other businesses which are users of the commodity will likely also be effected."
The 76-year-old Mr Lim founded Hin Leong in the early 60s. Starting out as a single-truck oil dealer, he grew the company into one of Singapore's largest independent oil-trading firms; its trading turnover surpassed US$14 billion in 2012, says its website.
Mr Lim's empire includes Ocean Bunkering Services, which was the city state's third-largest marine fuel supplier by volume last year. It was in the top spot in 2018, going by data from the Maritime and Port Authority of Singapore (MPA).
Relative to the other businesses in the group, bunkering may be faring well; MPA's March data on Singapore's port performance reports that bunker sales rose nearly 6 per cent from the preceding year.
Mr Neo said: "Many of us thought bunker volumes would fall, but it turned out much better than a year ago and even higher than in February."
The group also owns Ocean Tankers, one of the biggest tanker owners in the world with more than 100 oil tankers of varying sizes, including 14 very large crude carriers (VLCCs). Having expanded and bought many of these VLCCs in the boom years to fuel growth, the group may be paying a steep price for that now, with tanker rates having barely recovered since the 2014-2016 slump, say market watchers.
Another prized asset is Universal Terminal, a commercial storage facility spanning 56 hectares, or the size of 60 standard football fields. The terminal is on Singapore's Jurong Island, which Hin Leong co-owns with China's oil giant PetroChina.
Hin Leong had planned to float Universal Terminal as a business trust in 2014, but the oil crash then put paid to the S$1 billion initial public offering aspirations. An observer said that if push comes to shove, this asset could land on the block to help resolve the company's woes.
One industry player is confident Hin Leong will be able to ride out the storm: "The company has gone through many rounds of oil busts and come out well. What it's facing is a short-term credit crunch in very unusual times. I'm sure it'll pull through".
Source:BusinessTimes