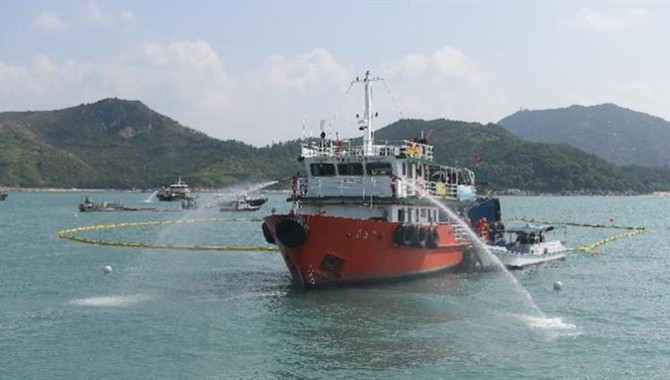 Two annual marine pollution response joint exercises, codenamed Oilex 2019 and Maritime Hazardous and Noxious Substances (HNS) 2019, were conducted by various government departments this morning (October 22) off the western coast of Lamma Island to test their marine pollution responses in the event of spillage of oil and HNS in Hong Kong waters.
In the test scenario, a local oil tanker collided with a container vessel, leading to fuel oil spilling from the oil tanker and three containers loaded with white phosphorus falling overboard. Subsequently, an oil spill response team arrived at the scene and cleaned up the spilled oil on the sea surface. The Fire Services Department (FSD) and other response groups were also tasked at the scene to contain and handle the probable spilled HNS as necessary to prevent threats to the nearby environment and facilities.
During the exercises, various participating parties conducted a series of simulated response actions. After the simulated oil spill, the oil tanker anchored at Ha Mei Wan at Lamma Island and a salvage team transferred the fuel oil from the damaged tank and patched up the leak so as to stop further oil spillage at source. An oil combat team deployed floating barrier booms to encircle the oil tanker and set up barrier booms near the oil tanker to prevent the spill from spreading. The exercise also simulated the spraying of oil dispersant with water from pollution control vessels and a Government Flying Service (GFS) helicopter onto oil on the sea surface, as well as the use of oil skimmers and other equipment. Simultaneously, a shoreline cleaning team conducted a shoreline oil clean-up drill at Tai Wan To, a non-gazetted beach, on Lamma Island. In combating the simulated HNS spill, the response groups lifted the damaged containers out from the sea.
The joint response exercises were co-ordinated by the Marine Department together with the Environmental Protection Department. The participating government departments and organisations included the FSD, the GFS, the Hong Kong Police Force, the Government Laboratory and the Civil Aid Service, as well as several oil companies and a pollution control company jointly formed by them.
The response exercises not only provided hands-on experience for response members, but also helped relevant parties to adopt an effective emergency response strategy for preventing pollution according to the properties and extent of the spilled substances.
On October 14 the Hong Kong Government proposed to amend the Merchant Shipping (Prevention of Oil Pollution) Regulations (Cap. 413A) and the Merchant Shipping (Prevention of Pollution by Garbage) Regulation (Cap. 413O) to incorporate the latest requirements of the International Convention for the Prevention of Pollution from Ships of the International Maritime Organization (IMO) into local legislation.
Source:hongkongmaritimehub