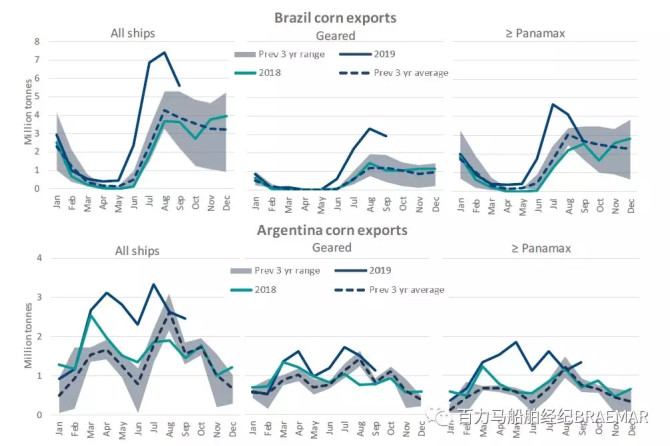 Be a-maized
Corn exports from South America have hit record levels this year, with volumes already surpassing last year’s total. This has displaced some supply from the US and has offset the dip in soybean trade due to African Swine Flu.
Bumper crop in South America
Following a record 2018-19 corn harvest, Brazil and Argentina have shipped a combined 49m tonnes of corn over the first nine months of the 2019. This already tops total exports over 2018, which were 42m tonnes, and YTD, marks a 75% YoY increase according to AIS data.
This is in contrast to what we have seen in the soybean market this year: Soybean volumes out of South America are down 8%YoY as demand from China has been hit by African Swine Flu. But China takes more of a back seat in the corn market, and South American farmers have put more focus into their corn crops this year.
Corn accounted for 30% of South American Agri bulk exports over Jan-Sep this year, versus 18% over the same period in 2018. By switching the focus from soybeans, Brazil and Argentina have boosted agricultural sales to destinations other than China. As such, despite the dip in soybean trade, surging corn exports have pushed total agribulk shipments from Brazil and Argentina 8% higher YoY.
Increased demand for ships from South America has been benefitted all of the bulker segments in the grain trade (see below), drawing on tonnage in the region. Panamaxes saw the largest increase in corn liftings from these countries, rising by 80% YoY to 28m tonnes, translating to an additional 394 shipments.
Average monthly Panamax loadings in ECSA have increased by 77% YoY to 96 vessels per month. We also saw several Panamaxes part-loading cargoes of corn with other grains, so increased demand for these ships may be understated by corn trade volumes alone. So far this year Handysize and Supramax ships loaded 228 more cargoes than last year, with volumes jumping 48% YoY to 21m tonnes.
Displacing volumes from the US
Strong corn supply from South America weighed down on export prices there, pricing out supply from the US. In contrast to South America, exports from the US have been lacklustre so far this year. Over Jan-Aug, exports from the US were 17m tonnes, down 41% on the same period last year. 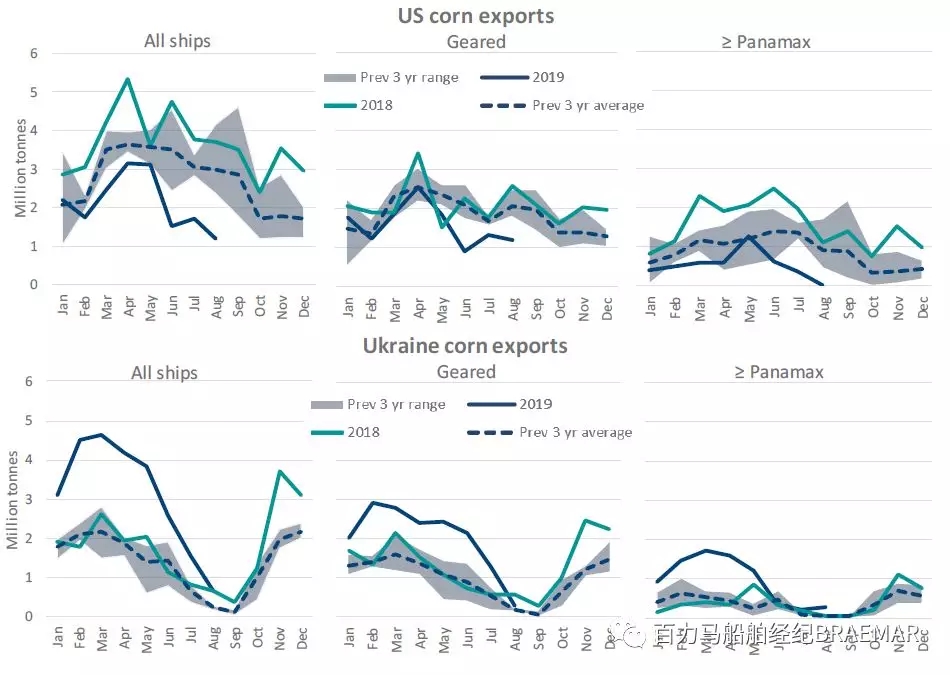 This year we saw key US export markets such as Japan and South Korea switch to competitively priced Brazilian or Argentinian corn during the US’ seasonal exporting period. Shipments to East and South East Asia from ECSA over the first 8 months of this year reached 14.6m tonnes, a 230% YoY jump.
Meanwhile US shipments to these countries halved over the same period, standing at 7.4m tonnes. Amid the spread in corn prices across the Americas, we even saw a handful of Panamax and Ultramax cargoes making their way from Brazil to the US, despite it being the largest producer of corn globally.
Pacific vs. Atlantic volumes
The shakeups have disproportionally hit corn exports from West Coast USA, which is predominantly a Panamax load region. As such demand for these ships in the Pacific was hit the hardest (see below).
However, with Asian buyers replacing these volumes with South American supply, we see an upside for the bulker fleet. Supply from the Atlantic basin outpacing that of the Pacific means that corn being shipped to these countries is travelling greater distances and generating more tonne-mile demand for the fleet.
Black Sea volumes up
2019 has also been a bumper year for Ukrainian corn exports, which have almost doubled YoY to 25m tonnes over Jan-Sep 2019 (see chart). These extra shipments from the Black Sea have largely headed to Ukraine’s traditional trading partners in the Mediterranean and Northern Europe, providing a lift to regional trade.
Panamaxes enjoyed the greatest demand increase, loading 129 corn cargoes in Ukraine this year, vs. 47 over the same period last year. We also recorded an uptick in long-haul Ukrainian corn shipments to China, which have surpassed 3m tonnes so far this year, a 57% YoY increase.
Increased US volumes to come?
US and South American corn prices have aligned in recent weeks, and US supply is again competitive in the market. Swelling stocks in the US are weighing on prices and Brazil and Argentina’s corn sales are slowing as the soybean planting season commences.
As such we expect US exports to pick up over the next few weeks, though volumes will likely remain below average for the season.
Nick Ristic
Capesize: For the routes traded in Asian markets, we seem to be finishing the week on a distinctly softer note and the rates notably retraced on both Brazil and C5 markets over the course.
Owners appeared less sure to embark on the ballast past Singapore as 1H Nov fixtures started to print at below $21 bss C3. Likewise the C5 markets for end Oct / early November remained flat-softer as circa $9 was reported for the same position. TCE returns narrowed within $1,000 as the previously discounted Pacific markets showed relatively less movement compared to the C3. This being said, many ballasting Owners still seemed to hold off fixing. They have the view that demand will increase as we progress onto later laycans in November and suggest the current downturn is attributed mainly to the lack of cargo at the front end of the month.
Despite the solid transatlantic fixture for a bit forward 4-10 Nov, laycan for EC Canada/Cont at around $28k in terms of TCE on BCI, done by a European steel mill, the positivity appeared to have dominated the Atlantic market last week faded and the Fronthaul fixtures gone a bit lower than last week, although stayed much steadier than the C3 route.  A cargo for EC Canada/Feast for mid-November was done on Wednesday at a rate which would equate to gross daily return of around $50k on BCI basis if duration adjusted to 65 days, and this compares to a couple of Fronthaul fixtures done at gross TCE around $53k middle of last week.

Panamax: The market continued slide in both basins, but at a slower rate in the Pacific. Being so close to the end of the week, it is hard to say if the Pacific is out of the woods. This is because some feel that Owners with prompt positions might be under a little more pressure, despite tonnage build up looking much less than last week.
Indo/South China although less cargo than the same time last week, a Panamax is close to 13.5k and a Kamsarmax close to 14.5k. East Coast Australia. Activity has also been slightly less than last week with India destinations looking the weakest, a Kamsarmax was heard fixing 14.5k basis Korea and a Panamax close to 13.5k.
Nopac was the saviour in the Pacific this week with the grain houses taking several vessels and some expecting them to continue doing so. A below average Kamsarmax was heard fixing 15k basis Japan and a Panamax is expected to be close to 14k. ECSA activity has slowed greatly even though there are cargoes. Charterers seemed more willing to wait, an eco Kamsarmax was heard holding 17+700 aps for early Nov dates. In the Atlantic, the slowdown in demand is slowly starting to cause a tonnage build up, although would say only slight, with a Panamax TA expected to close around 15k.