COSCO Shipping Holdings achieved net profit of RMB1.24 billion for the first half of 2019 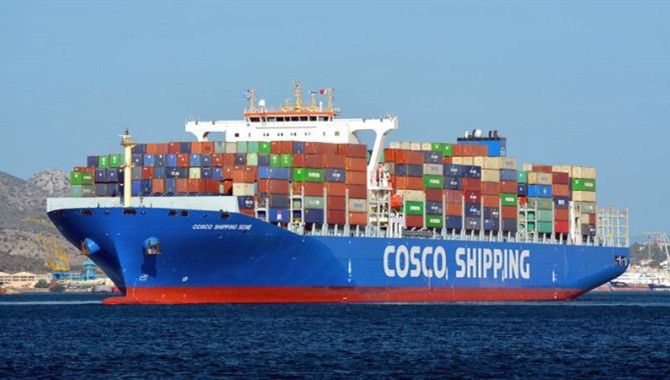 In the first half of 2019, global economy and trade faced severe challenges and increased uncertainties, and the growth in demand for container shipping was slowing down. However, at the same time, pressure on the supply of shipping capacity in the industry eased with newly delivered shipping capacity decreased and scrapped capacity increased as compared to the same period of last year. According to the statistics, the growth rate of both demand and supply in the global container shipping market in the first half of 2019 was less than 2%. The average China Containerized Freight Index (CCFI) was 828 points, increased by 3.9% as compared to that of the same period of last year.

During the reporting period, COSCO SHIPPING Holdings proactively responded to adverse external factors. Under the guiding principle of “outperform the market, drive innovation, and lead the times”, COSCO SHIPPING Holdings focused on improving the quality of shipping services, fully leveraged the advantages of scale and synergies after the acquisition of OOIL, and have achieved relatively good results. In accordance with Hong Kong Financial Reporting Standards, in the first half of the year, the Company had achieved revenue of RMB 71.8 billion, and recorded net profit attributable to equity holders of the Company of RMB1.16 billion, representing a significant increase from RMB40.796 million for the same period last year. The basic earnings per share amounted to RMB0.0977.

In respect of container shipping business, the Company's fleet scale was in steady growth. In the first half of the year, a total of eight large container vessels were delivered, with a total shipping capacity of 144,000 TEUs. They were put into operation in Asia-Northwest Europe, the US East Coast and the Middle East routes. As at 30 June 2019, the container fleet operated by two liner companies under COSCO SHIPPING Holdings had 493 vessels, with the total shipping capacity reached 2,896,881 TEUs, representing a growth of 5% than the end of 2018.

To further implement the "OCEAN & PLUS" strategy, the Company focused on customers and proactively optimized its shipping capacity layout, upgraded the Ocean Alliance route products. The Company was also taking an active part in the "Belt and Road" development, and enhanced its shipping capacity and service input in the markets such as Europe, Southeast Asia, Middle East, West Asia, Latin America and South Africa, and at the same time stepping up its effort in the construction of feeder service network in intra-regional markets.

In early April 2019, OCEAN Alliance, of which COSCO SHIPPING Lines and OOCL are members, launched the DAY3 route products, covering 40 routes and offering 594 port pairs services with a total shipping capacity of 325 vessels and 3.82 million TEUs, representing a leading position in the industry in terms of route networks, scale of service and coverage. As a result, the Company managed to consolidate its competitive edge in east-west routes.

On the improvement of route network layouts, the Company continued to expand its coverage of emerging markets in the first half of the year, and accelerate its deployment of regional and non-China routes. In the period, COSCO SHIPPING Lines sought to optimize Far East to east coast of South America routes and Europe to west coast of South America routes, and OOCL expanded its coverage of the emerging markets by adding new routes between Middle East/India Subcontinent and North Europe, and also Asia to Latin America as well. The two liner companies also continued to improve the service in intra-Asia region, and raised its total number of service routes to 42 in Southeast Asia. These moves served to effectively capture the growth of cargo transportation in Southeast Asia, and provide improved supporting feeder networks for vessels in trunk routes entering and leaving the Southeast Asia region. At the same time, the two liner companies optimised the Middle East regional routes centered on the Abu Dhabi hub port, and enhanced European intra-regional routes, with three new routes with Zeebrugge as port of call added in the first half of the year. Currently, 27 intra-European routes have been put into operation in Europe, providing high-quality transportation services to customers in 25 countries and regions in Europe. The percentage of shipping capacity deployed by the two liner companies in emerging markets and intra-regional markets has increased to 16% and 36% respectively, making the layout of their shipping route network more balanced and global. The Company also proactively responded to new shifts in cargo flow brought on by the China-US trade friction, by expanding shipping capacity of Southeast Asia to the United States routes through adjustment of vessel types, and at the same time strived to improve the marketing and service capabilities in Southeast Asia and South Asia. In the first half of the year, the volume of the two liner companies in non-China routes increased by 7.8%, accounting for 37.1% of their total foreign trade cargo volume (i.e. volume excluding China domestic routes).

As for terminal operations, COSCO SHIPPING Ports, under the Company, as a global leading port operator, further improved its global terminal network and improved the operation quality and service level of its controlling terminals with a focus on “Belt and Road” and emerging markets. CSP Abu Dhabi terminal has successfully commenced commercial trial operation, and the port is looking to become a major container port and an important hub port in the Middle East. In the first half of the year, COSCO SHIPPING Ports successfully acquired 60% equity interest in Peru’s Terminales Portuarios Chancay S.A., which is the Company’s first subsidiary in South America. In April, COSCO SHIPPING Ports announced its investment in a supply chain base project in Nansha, Guangzhou, to further enhance the port’s extended services so as to meet the diversified requirements of customers and actively cultivate new growth points. In July, the resource allocation of “three-in-one” terminal integration project at the Tianjin Port was optimized the integrated management standards of non-controlling terminals of the Company were improved, which contributed to reducing operating costs and enhancing corporate competitiveness.

In July 2019, CargoSmart, a global leading shipment management software solutions provider and a subsidiary company of OOIL, announced the execution of Global Shipping Business Network (GSBN) Services Agreements with maritime industry operators CMA CGM, COSCO Shipping Lines, COSCO SHIPPING Ports, Hapag-Lloyd, Hutchison Ports, OOCL, Port of Qingdao, PSA International and Shanghai International Port Group. Under these agreements, each signatory commits to provide resources to support preparatory work required to establish the GSBN, a not-for-profit joint venture to accelerate the digital transformation of the shipping industry. Upon its establishment, the GSBN intends to provide a platform for all shipping supply chain participants to work collaboratively to accelerate technology innovation and develop solutions through trusted and secure data exchange platforms. The GSBN can unlock underlying value and create exciting new opportunities for all shipping supply chain participants in a more open and transparent way. The signatories of the GSBN Services Agreements plan to complete the establishment of the GSBN in early 2020. The initial preparatory efforts to explore and test the feasibility and value of using blockchain technologies are underway and showing promise.

In the implementation of digitalized shipping, the proprietary e-commerce platform of COSCO SHIPPING Lines continued to maintain solid growth. The volume delivered on the e-commerce platform in domestic routes reached 285,000 TEUs in the first half of the year, with a total transaction amount of RMB540 million, representing an increase of 4% as compared to the same period of last year. Foreign trade e-commerce business continued to develop and has covered all foreign trade routes. At present, customers can enjoy a variety of personalized services on the mobile terminal such as information subscription, to-do items, imported electronic container collection, visible reports, etc., and enjoy one stop services including centralized cargo booking, centralized customer services, centralized operation, centralized invoicing, centralized settlement, and centralized billing through the e-commerce platform at different ports, which will further enhance the customer experience. OOCL customers participated the CargoSmart’s Blockchain Pilot in shipping of dangerous goods cargo. It allows customers to benefit by having real-time visibility of their shipments and speeding up of dangerous goods cargo approval process.

Leveraging its routes layout, the Company actively promotes the effective docking of shipping and inland transportation channels, and continuously improves its capability in providing end-to-end one-stop transportation services, in order to offer a rich variety of sea-rail intermodal channel product mixes. At present, the Company operates 123 railway routes for foreign trade, and 167 railway routes for domestic trade, and the number of door-to-door service points has exceeded 20,000.

During this year, the Company proactively implemented the “dual brand” strategy, focusing the synergies among routes network optimization, improvement in efficiency on equipment utilisation, centralized procurement, information system construction and other aspects, further explored the potentials of business synergies, leveraged competitive advantages, and expanded the influence of the dual brands.

In the first half of the year, the Company refined its fleet resources to optimise vessel types deployed for each route. Through the exchange of several vessels of different types by chartering under the dual brands, the fleet resources were fully utilized. In terms of routes layout, we continued to promote OOCL's use of COSCO SHIPPING Lines’ slots in Africa and South America routes. OOCL has covered seven countries in Africa and nine Far East to Africa routes; eight countries in South America and three Far East to South America routes. At the same time, joint operation was launched under the dual brands in European to West Africa routes. In the first half of the year, the transfer of ship operation rights on the Trans-Atlantic route was successfully completed. After the switch, OOCL operated all vessels of the Trans-Atlantic routes under the dual brands, and COSCO SHIPPING Lines continued to offer the Atlantic route service products by purchasing slots on vessels of OOCL.

Looking forward to the second half of 2019, relatively large uncertainties persist in global economic growth and trade situation, and China’s economy faces increasing downward pressure. The International Monetary Fund (IMF) has repeatedly lowered the figures in the forecast of the global economic growth in 2019. It is expected that demand in container shipping market will maintain a slow growth. Meanwhile, as the shipping capacity to be delivered during the year will be relatively low, and the new IMO low-sulfur regulation is expected to accelerate the scrapping of old vessels of less operational efficiency and the temporary halt of service of some vessels to be installed with scrubbers, pressure on the supply side of container shipping capacity growth will be relatively low, which serves to maintain the market freight rate at a reasonable level. In addition, there are development opportunities. China's total trade volume with the countries along the “Belt and Road” is expected to continue to grow rapidly, and the Second China International Import Expo will help China expand the import of consumer goods, which will provide positive impetus in raising backhaul container cargo volume and balancing the volume on both directions.